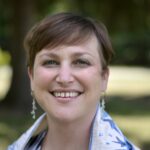 Rabbi Ilana is thrilled to have joined the BHSS community. She spent the last 8 years serving Congregation Kol Ami in Salt Lake City, Utah. Prior to that, she was the Assistant Rabbi of Temple Beth Zion in Buffalo, New York. She received her undergraduate degree from the University of Virginia and went on to study Hebrew at Ben Gurion University in Beer Sheva, Israel. She was ordained in 2007 from Hebrew Union College – Jewish Institute of Religion in Cincinnati, Ohio.

Rabbi Ilana is a third-generation rabbi. Her grandfather Rabbi Sylvan Schwartzman (z”l) was at the forefront of Reform Jewish education and her father Rabbi Joel Schwartzman has served as an Air Force chaplain and a congregational rabbi.

Rabbi Ilana has lived in places far and wide, including Germany, Greece, Israel and many states within the U.S. She, her husband Art, and daughter are happy to be setting down roots in the BHSS community.

Rabbi Ilana views the contemporary synagogue as a home for prayer, spirituality, social action, study, leadership and engagement and is devoted to these pursuits in her rabbinate. In addition to a love for Judaism and Jewish texts, she has a great love for people and their stories. Her joy lies in the interplay between intellectual Judaism and personal relationships. She also believes that music is a powerful vehicle through which we can connect to each other and God.

Cantor Kruk joined us beginning with the 2021 High Holidays and we are grateful to have his beautiful voice and bimah presence for our Shabbat and B’nei Mitzvah services for the 2021/2022 season.

He was born in Chernivtsi, Ukraine, and studied music from the age of six as well as violin and piano in music school. He also completed vocal studies in a music college, and served in the Red Army Choir as a soloist. Unhappy with many years of prohibition and persecution, he emigrated to Israel where he continued his vocal studies at the Academy of Music of Tel Aviv University.

Later he served in the Rabbinical Military Choir as a soloist. In 1981 he represented Israel in the 10th International Vocal Competition held in Rio de Janeiro, Brazil. Cantor Kruk has performed leading operatic roles for the Israeli Rubin Opera Company, the National Radio and Television Orchestra, and Bronx Opera House, New York. He has appeared in many concerts and recitals throughout Israel and Russia. In 1982 he arrived in the United States, where he continued to study voice at the Julliard School, American Opera Center of New York.

Since graduation, he has sung at many concerts and performances in Israel, Canada, and United States. In search of his Jewish identity and love for cantorial music, he began a new phase in his vocal career in 1989, by becoming a student at Hebrew Union College-Jewish Institute of Religion, School of Sacred Music, and in 1993 he was invested as a cantor. Cantor Kruk is married to Polina, born in Kyiv, Ukraine and they have a beautiful daughter Nili.